Hybridization of greater and lesser prairie-chicken is uncommon but well established in the western part of Kansas where their ranges overlap. A hybrid bird was first documented in April 2001 by a wildlife biologist who first noticed the differences in booming sounds on a mixed lek. 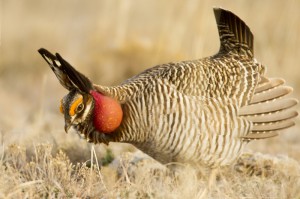 Hybridization is thought to occur at a rate of about 4 percent in the area of overlap. It appears that in most cases, females of both species do not recognize hybrid males as a mate and ignore them on the lek.