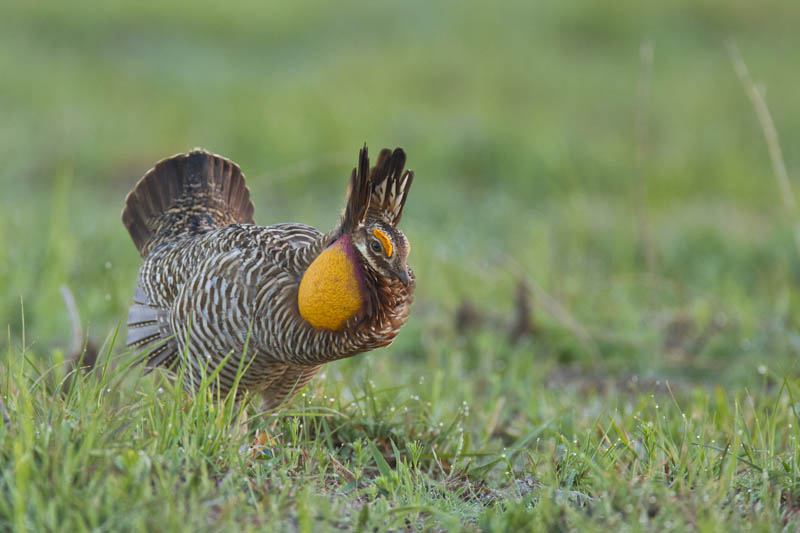 It has been six years since I visited the Attwater Prairie Chicken National Wildlife Refuge in Texas. Although I was able to get quality images six years ago, I felt that they were not strong enough to represent this species in extreme danger of extinction. My goal for this trip was to document the uniqueness of their courtship behaviors and the habitat that they depend on.

Attwater’s Prairie Chicken (tympanuchus cupido attwateri) is a subspecies of the Greater Prairie Chicken and currently is found in the wild at only three locations in Texas. With a population of less than 120 in the wild (and another 135 individuals being held in captivity for reproductive purposes), it is federally listed as an endangered species.

My trip began with a snowstorm as I left home in Missouri. With new airline restrictions, I was able to carry only minimal photographic equipment with me. During the trip I packed two DSLR bodies, a 600mm f/4, 70-200mm f/2.8, 17-40mm f/4, 100mm f/2.8 macro lens, flash and other accessories. Amazingly, all these fit into my trusted “Think Tank Airport Security” rolling bag.

Upon arrival in Southern Texas, I was greeted by warm, humid air. I met with the head biologist at the refuge and we spent the next few hours searching for an ideal “lek” or breeding ground to photograph. We found an area where there were feathers from the previous territorial disputes of the male birds. I left my photo blind there that evening and hoped it was the right place.

Photographing grouse, like any other wildlife, takes a labor of love and patience. That’s what I have learned over nearly ten years of photographing grouse. First, I am at the mercy of the animals since I can’t tell them where to be and what to do. Second, the lighting has to be just right. Lastly, when they arrive to fight and do their dance, I have to be ready.

It was completely dark, with the only light coming from the new moon. The sky was clear, the air was cool, and I could see the Milky Way over the Texas prairie. My mind was wondering about what the first light would bring.

Sitting in my photo blind waiting for the birds to show, I could feel such connection to nature and the animals around me.

Even before the sun rose, birds showed up and started to boom “oh-woo-loo”. My eyes could barely adjust to the darkness, but I knew they were there and close to my blind. A small figure rushed past, squawking and crackling. It then made another “oh-woo-loo” and my heart began to race as my mind tried to comprehend what might lie ahead.

The sun finally peeked over the horizon. Now I could see eight male birds around my blind in addition to thirteen hens that had come and gone. Whenever hens would show up, all male birds would do their very best to impress them by stamping their feet, dancing in motion, and making a booming call. They went on dancing and booming for hours. It is amazing the incredible amount of energy they put into this courtship performance.

It is a special and spiritual sight to see and can only truly be appreciated by people who have witnessed their booming dance and heard their calls. Over the years, it has been these sights and sounds that have kept me going on this project.

The last hen left the lek. The booming activities started to slow down and all males began to depart right afterward. Only then did I emerge from my blind.

I returned to the lek for the next four days both morning and evening.

I feel lucky and privileged to be able to witness one of the rarest birds in the world. It was one of the most intense photo-shooting weeks of my career and I came home completely exhausted.

Was it worth it? I hope you can be the judge.