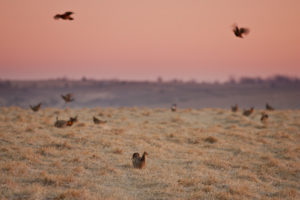 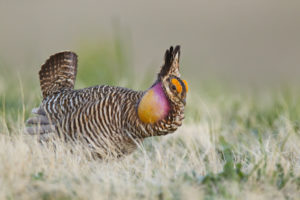 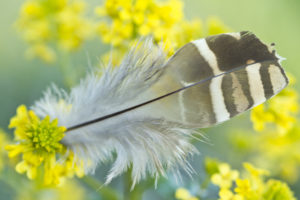 Owned by the Nature Conservancy, Dunn Ranch consists of over 3,000-acres of prairie in northern Missouri. It is part of the approx. 70,000-acres that make up the Grand River Grasslands conservation area.

At the time of my visit, Dunn Ranch had the most prairie chickens in Missouri, with over 40 male prairie chickens at peak, and offered a viewing platform for bird watchers and photographers.

It was quite an impressive sight to see a large group of male prairie chickens gather on the lek, performing a spring mating ritual.

The population took a sharp turn in 2009 when only 3 males were observed during the springtime and 6 males in the following year.  How could this happen in such a short period of time?

Missouri experienced heavy rain for three years in a row, especially during the month of May, which is the nesting season for prairie chickens.  The heavy rain and the flood washed away many nests in the prairie.

This year I visited Dunn Ranch again.  I arrived well before sunrise in my photo blind, anxiously waiting.  Sadly only three males showed up, and they were young birds, most likely born only the previous year.  The display was short and brief since they were inexperienced compared to older birds.

This scene reminded of what happened at Golden Prairie, where three males lingered around until they too disappeared forever. It is sad to think about what would happen to them at Dunn Ranch. Will I be able to see them again next year?

Time is running out.